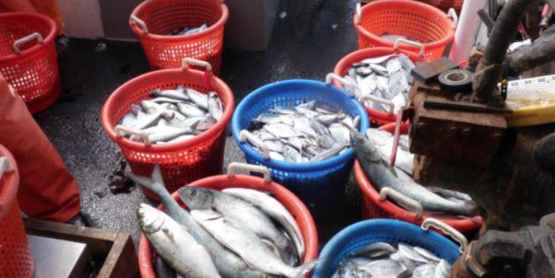 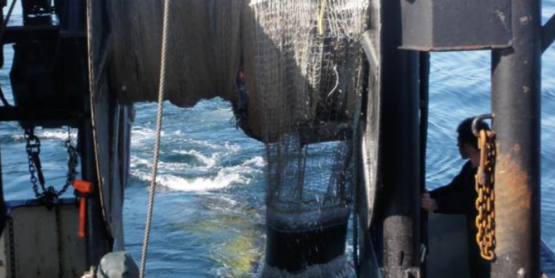 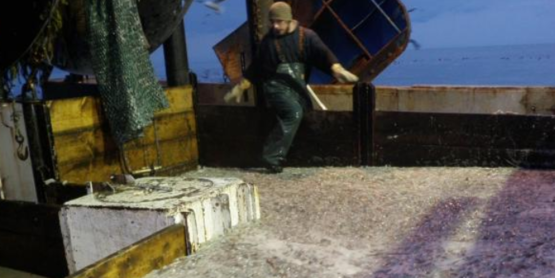 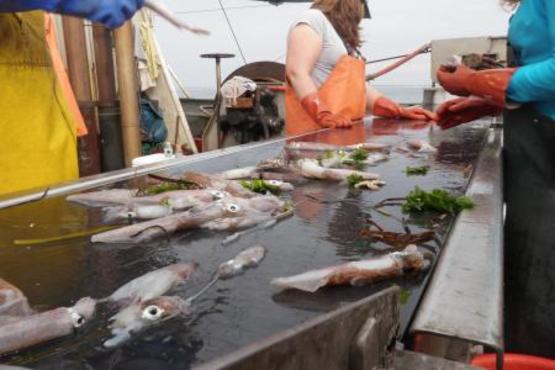 The goal of this project is to develop a bycatch reduction device (BRD) that will prove effective at reducing the number of butterfish caught in the Loligo squidfishery. In addition, in order to be deemed successful the BRD cannot cause significant reductions in squid catches and it must be adaptable to existing fishing gear. The approach that we (Cornell Cooperative Extension Marine Program) took was to develop two separate BRD's that can be used in conjunction or separately. The first BRD (BRD1) is a panel or panels constructed of larger mesh than that of the surrounding net. This panel will be inserted into the net ahead of the codend (the codend is the portion of a trawl net that collects the fish and allows them to be brought aboard and dumped onto a fishing vessel). The placement of the panel/panels within the net could also be varied so the location could be top and/or bottom or laterally (one or both sides). The purpose of the large mesh panel/panels is to offer actively swimming butterfish a chance at escapement before being captured in the codend. The second BRD (BRD2) is simply a readily available black tarpaulin that will be stitched around the entire inside circumference of the net. The tarpaulin will be approximately two feet in length and again will be placed just ahead of the codend. In addition, placed immediately ahead of the tarp will be a large mesh panel similar in design to that of BRD1. The purpose of this black tarp is to present fish with the false impression that their passage is blocked and this will promote them to use the large mesh panel to escape capture in the codend.

The research for this project was done using a single vessel that is capable of towing two trawl nets simultaneously. This is an ideal situation when testing fishing gear because it allows the experimental gear to be compared directly to the existing gear. It essentially eliminates an array of variables that would occur if two boats were used or one boat was used that altered its fishing between existing and experimental gear. Simply put, the vessel towed a standard, unaltered trawl net (control net) alongside the exact same net that that has been outfitted with a BRD (experimental net). All fishing occurred as would normally be done by the vessel on a standard commercial fishing trip. Comparisons of the control and experimental nets will be based on differences in butterfish and Loligo squid retention and total catch. We will also attempt to use video to observe the behavior of both fish and squid relative to the BRD's. Results of the video work and initial assessment of collected data will allow for fine tuning and alterations to the BRD designs throughout the project.

To date Cornell has completed a two day shakedown cruise that included some video of the BRD's at work and three actual research trips that also included some video work. The quality of the video from the shakedown cruise was better than we ever could have anticipated and provided an ideal opportunity to make some critical alterations to improve the performance of the BRD's before the first research cruise that was scheduled in December 2010. The alterations included the addition of four kites on the outside of the net surrounding the location of the BRD. This was done because the video showed the mesh in the BRD was not spreading open to its full extent. The addition of the kites should solve this problem and thus provide the maximum area available for escapement. The three research trips occurred in January and February of 2011 and resulted in 13 days of experimental fishing with a total of 71 tows. The hope is that this project will provide substantial data resulting in practical solutions that will help address the problematic butterfish stock without hampering the successful squid fishery. Fisheries managers will have a tool that will alleviate the effects of a butterfish bycatch mortality cap and fishermen will be able to continue to fish for the lucrative Loligo squid for a nominal investment.

Limited data analysis has been performed on the large amount of data that has been collected during this project to date. Initial statistical analysis of several of the key aspects of this research showed the following results. In reference to the location of BRD1 (large mesh panel) with BRD2 (black tarp) in place, the following results were observed. Placement of BRD1 on the bottom of the net showed significantly different results relative to butterfish catch when compared to the control net. The opposite was true of BRD1 location and squid catch. Initial comparison provided a non-significant overall effect on squid totals, although the power of the overall test was moderately low. We also looked at what the effect of removing BRD2 from the experimental net had on catch totals. Removing the black tarp that created the tunnel effect showed no significant difference in totals of either butterfish or squid between the control and experimental nets. Again, it must be stated that this analysis is preliminary and a much more thorough examination of all the data will be made before any final conclusions can be made.