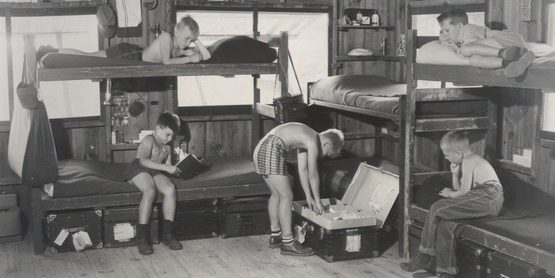 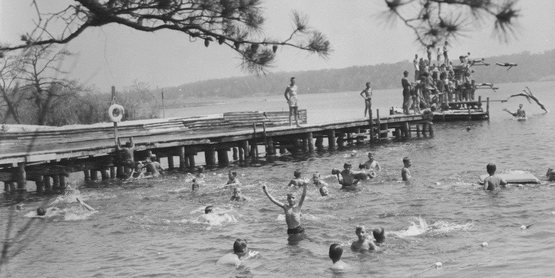 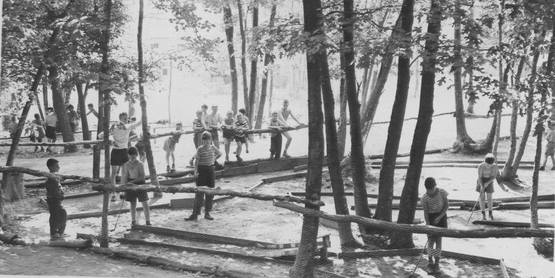 During World War I, Long Island was home to Camp Upton, a temporary military base where Brookhaven National Lab now exists. After the war ended, the government decommissioned the base and gave away the buildings and equipment. In 1923 a young visionary, Luvia Margaret Willard, MD (1882-1977), acquired some of the lumber from these buildings and used it to build a camp for girls. She called it “ Camp Dunes.”

Dr. Willard graduated from Stanstead Wesleyan College in 1902 and Cornell University Medical College in 1909. She also wrote poetry and published many volumes, including one book called “Bric a Brac”, which explores her feelings about life on the North Fork of Long Island. Dr. Willard founded the American Women’s Hospital Reserve during WWII, which was a group of women who drove ambulances and gave first aid in Queens, NY.

Camp Dunes opened its cabin doors on June 30, 1924. Camp Dunes was located on over 26 acres on the Long Island Sound and included access to Great Pond Lake. The rate was $150 for 8 weeks of summer camp, according to an ad in the Long Island Daily Press (June 17, 1924). Food for the camp was purchased from neighboring farms and village markets, and the female camp goers engaged in various activities: swimming, boating, play-acting, and the like. “The maritime climate together with the unusual amount of sunshine peculiar to this locality make for an unusually healthful environment.

On December 11, 1931 Dr. Willard sold her camp to Thomas and Lois Ward –founders of what would become Pinecrest Dunes Camp for Boys. Mr. Ward and Mrs. Ward built the camp up over the next 40 years, expanding its audience to include girls and a week for children with special needs. You can read much more about Mr. Ward and Pinecrest Dunes at the Southold Historical Society. Photos of Pinecrest Dunes, 1949-1956, have been shared by Pinecrest alum P. Barton Erickson and uploaded here.

In 1971 the Suffolk County Department of Parks, Recreation, and Conservation took over operations and re-opened under the name “Peconic Dunes Camp,” paying homage to both the dunes on which the camp was built and the nearby town of Peconic, NY. The county continues to own the property today, and in 2003 contracted with Cornell Cooperative Extension of Suffolk County to operate it.

As part of the Extension system, Peconic Dunes became affiliated with 4-H and adopted their mission of "engaging youth to reach their fullest potential while advancing the field of youth development.” The goal of 4-H is to develop citizenship, leadership, responsibility and life skills of youth through experiential learning programs and a positive youth development approach. 4-H today focuses on citizenship, healthy living, science, engineering, and technology programs.

Much has changed since 1924, but this poem by Dr. Willard still holds true:

Thank you to Geoffrey Fleming and the Southold Historical Society for their help in researching and writing some of our camp’s history.

Peconic Dunes 4-H Camp has been an American Camp Association (ACA) accredited camp since 2006. ACA collaborates with experts from the American Academy of Pediatrics, the American Red Cross, and other youth-serving agencies to assure our practices reflect the most up-to-date, research-based standards in camp operation. 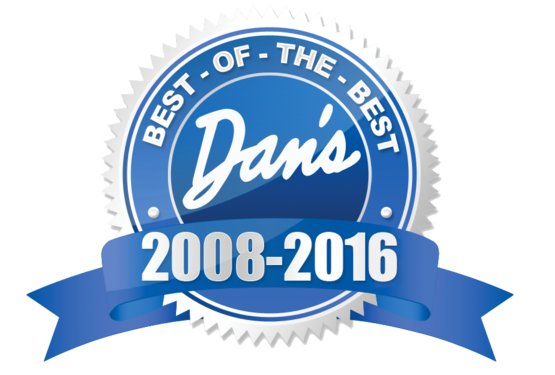 For the past 8 years the readers of Dan’s Papers have voted Peconic Dunes 4-H Camp the Best of the Best Summer Camps on the East End of Long Island.

If you’re interested in supporting the work of Peconic Dunes 4-H Camp you can donate here or contact the camp office to discuss other ways to support our work.