The monkfish (Lophius americanus) fishery has been assessed and managed as two distinct units, a northern and southern stock, since the inception of its fishery management plan in 1999, although the fundamental management approach (DAS and trip limits) has been the same in both areas. The boundary between the two management units is currently Georges Bank although biological data supporting this division is largely lacking. In recent years further indirect and direct evidence on monkfish stock structure has accumulated and many uncertainties remain. This project will use a sensitive genetic approach, microsatellite DNA analysis, to empirically determine if monkfish constitute a single or multiple stocks over their coast wide distribution from Newfoundland to North Carolina and to determine if migrational mixing between management areas exists. In our preliminary one-year RSA study, we found that monkfish constitute two and maybe three genetic stocks across their coastwise distribution, but these genetic stocks do not correspond to the stock delineation currently used in their management. In this new project, we will build on our first year’s results by further defining the fine-scale stock structure of monkfish by focusing our attention on areas where spatial discontinuities in microsatellite allelic frequencies were observed in our initial RSA monkfish project. Additionally, we will empirically evaluate the temporal stability of diagnostic microsatellite DNA genotypes within and across sampling years thus ensuring that defined spatial genetic variability exceeds that of temporal genetic variability. Our genetic results will address a major void in the data needed to most effectively manage this resource: the identification of its stock structure. 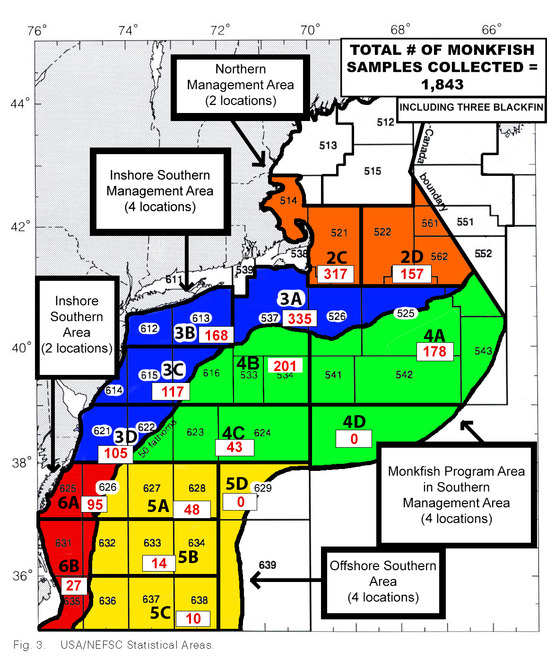