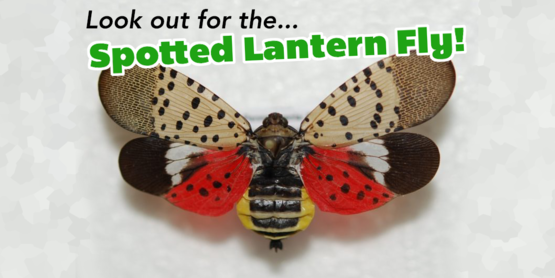 Spotted Lanternfly: The Next Worst Thing

Spotted lanternfly (SLF), a kind of invasive and unusually large (1” long) planthopper, is a non-native and damaging insect pest first discovered in the US in Berks County, PA in 2014. It has since spread and now appears to be established in several areas around NY, including Staten Is, Sloatsburg, Orangeburg, Port Jervis, Ithaca, and Queens. Individual adult lanternflies, but not egg masses or other stages (and no populations), have been found in other areas around NY including Long Island (it is not known to be established in Nassau or Suffolk Counties). SLF has relatively few natural enemies; spiders, some predatory insects, and birds will feed on them but are not effective for controlling populations, which, unrestrained, can build to high levels. The adult stage resembles a kind of gray moth with small dark spots on the front wings. Immature stages (nymphs) are sometimes mistaken for stink bugs or ticks.

SLF is strictly a sap feeder on mostly trees and shrubs; it does not feed on leaves or fruit and it does not attack humans, pets or other animals, damage structures or establish populations in homes. It has an unusually wide host range including dozens of common trees, shrubs, vines and sometimes herbaceous (non-woody) plants. Some preferred plants include grape, tree-of-heaven, red and silver maple, black walnut, river birch, hops, willow and sumac. Plants can generally withstand some infestation but may be weakened or suffer dieback. Heavy infestations, however, have been known to kill grape vines by consuming large amounts of sap and depleting plant reserves. High numbers of SLF can also be an annoyance producing large amounts of sticky honeydew that falls on plants and other objects below and attracts other insects. Sooty mold grows on the honeydew, which spoils the appearance and with sap loss reduces plant vigor.

There is work in progress to identify specific natural enemies that might be released and evaluating treatments for managing infestations. SLF is highly susceptible to some insecticides. Many options are available for commercial (agriculture and landscape professional) use with relative few labeled for home gardeners. More information and a map showing the current distribution of SLF can be found at: https://nysipm.cornell.edu/environment/invasive-species-exotic-pests/spotted-lanternfly/

The New York State Department of Agriculture and Markets has confirmed that the spotted lanternfly, an invasive insect, has been found in multiple counties in New York.  This insect is native to Asia and has also been detected in Pennsylvania (in 2014), New Jersey, Delaware and VIrginia.  The pest targets ailanthus trees, in particular, and attacks a wide variety of crops including grapes, hops, apples and forest products.

The insect is easy to identify with distinct markings. It will change hosts as it goes through its developmental stages.  Nymphs feed on a wide range of plant species (willow, maple, poplar, sycamore as well as fruit trees like plum, cherry, and peach) while adults prefer to feed and lay eggs on tree of heaven (A. altissima).

If left unchecked, the spotted lanternfly can potentially wreak havoc on the New York’s grape, orchard and logging industries.  It causes harm by sucking sap from plant stems and leaves. This can reduce photosynthesis, weaken the plant and eventually contribute to the plant’s death.

Invasive species can be transported to new locations in various ways.  While the insect can walk, jump, or fly short distances, its long-distance spread is facilitated by people who move infested material or items containing egg masses.  Spotted lanternflies are easiest to spot at dusk or at night as they migrate up and down the trunk of the plant.  If you find an insect that you suspect is the spotted lanternfly, please take a specimen or a photo and contact our Extension offices to have its identity confirmed.

New York State has recently implemented new actions to prevent the spread of the lanternfly within the state. As of October 2018, a quarantine will restrict movement of goods brought into New York State from Delaware, New Jersey, Pennsylvania and Virginia.

Another way to prevent the spread of this insect within New York State is to limit the spread of Tree of Heaven which is also an invasive species.  Young seedlings may be pulled or dug up, taking care to remove all roots and fragments, preferably when soil is moist.  Chemical controls work best during late winter/early spring and in summer.  The cut stump method is useful in areas where the trees need to be removed from the site and will be cut as part of the process.  The hack-and-squirt or injection method is also effective and minimizes sprouting and suckering when applied during the summer.

NYS Dept. of Environmental Conservation Spotted Lanternfly Page
Includes links to a poster with images of similar species, where to report sightings, and more information on SLF
Link: https://www.dec.ny.gov/animals/113303.html

The New York State Departments of Agriculture and Markets (AGM) and Environmental Conservation (DEC), and the Office of Parks, Recreation,and Historic Preservation (Parks) today announced an innovative effort to combat the spread of Spotted Lanternfly (SLF) in New York State. A new online interface will allow volunteer members of the public to assist in surveying for SLF and tracking associated data. The program encourages broader surveying for SLF and increased public awareness of this invasive pest, following confirmed finds of SLF in New York State this past fall.

NYS Department of Ag and Markets has announced a quarantine on materials moving into NYS from areas with spotted lanternfly – which currently includes Delaware, New Jersey, Pennsylvania, and Virginia.

In order to bring any of the regulated materials into NYS, a certificate of inspection is required. These certificates are provided by the seller.

Information on permits from PA is at:https://www.agriculture.pa.gov/Plants_Land_Water/PlantIndustry/Entomology/spotted_lanternfly/quarantine/Pages/Do-I-Need-a-Permit.aspx

Ag and Markets is working with the other states on permit requirements.

For the entire article, go to:

More information on spotted lanternfly is at:

Please keep an eye out for this pest!