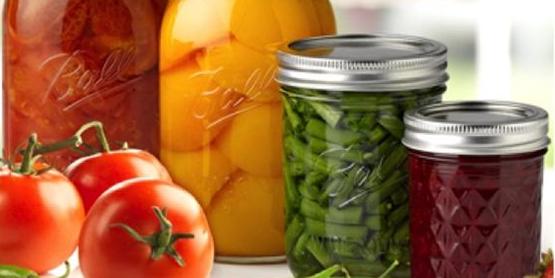 Capture the freshness of summer produce to enjoy all year long.

Saving Summer in a Jar

Saving Summer in a Jar appeared in The New York Times and was written By Susan M. Novick

Debra Kawaller, 58, of Northport went to a canning workshop because of a predicament familiar to many gardeners: She had a peach tree full of fruit that was ready to be harvested.

"It all comes in at one time," she said. "What are you going to do with all the peaches other than giving them away?"

So on a recent Saturday afternoon, Ms. Kawaller was one of 12 people chopping tomatoes for stewed tomato sauce while learning preservation techniques at Cornell Cooperative Extension of Suffolk County in Riverhead.

Working with her on the stewed tomatoes was Rick Morales, 42, of Farmingville, who said he saw canning his own food as a way to be self-sufficient, given the storms and power outages of recent years.

"It's good to go downstairs, pick something off the shelf and eat what we have," he said. "Canning is better than freezing that way. You don't need a generator."

Ms. Kawaller and Mr. Morales have a lot of company these days. Their teacher, Maryann Birmingham, 60, a community nutrition educator at Cooperative Extension, said she saw "a big surge in people wanting to eat more healthfully, to eat locally and to save what they're growing in their own gardens."

What began as a series of three workshops at Cooperative Extension in 2011 has expanded to more than 10 sold-out sessions this year. Next year, Ms. Birmingham plans two series of seven workshops for beginners and advanced participants, as well as a bilingual workshop in English and Spanish.

"My students are male and female, young and old, foodies and newbies, anybody who loves it or who grew up with their grandmother doing it," she said. "They're sure that some of that old-fashioned canning might not have been safe, but now there's science behind it."

Safety was the focus of a recent class by Ms. Birmingham in which a peck of late summer peaches were first blanched, peeled, sliced and simmered. Then came the tricky step: processing the preserves in a jar to create a vacuum seal.

Ms. Birmingham and a colleague, Gerry Lake, ladled the peaches into a wide-mouthed glass jar, prodded them with a long plastic utensil called a "bubbler" to release air trapped inside, and measured at least a quarter-inch between the fruit and the top of the jar to allow for expansion. Sterilized lids were carefully applied, and special tongs were used to gingerly place the jars in a boiling-water canner.

"Heating kills micro-organisms, so there's no food spoilage or food-borne illness," Ms. Birmingham told her students. "You don't need to worry as long as you follow the directions for time and temperature exactly."

When the timer rang after 10 minutes, the jars were removed from the hot water, and everyone gathered around to listen for the telltale "pop" that signaled an airtight seal. If you tap the lid, "it's a different sound, see? It's heavier, not so hollow," Ms. Birmingham said. She added that it was best to eat preserves within a year, although they could last for up to five years if stored properly, in a cool, dark place.

Another canning expert who teaches preserving techniques, Mark Vosburgh, 64, of Wading River, begins his classes as Ms. Birmingham does, with an explanation of the specialty equipment needed to can safely and successfully. High-acid fruits can be preserved using a boiling-water canner; low-acid vegetables need to be processed at much higher temperatures in a pressure canner with a gauge.

A recipient of a certificate as a master food preserver from Cooperative Extension, Mr. Vosburgh has won more than 100 blue ribbons in competitive canning events. He teaches classes at Hallockville Museum Farm in Riverhead and classes hosted by the Loaves and Fishes Cooking School at the Bridgehampton Inn. He also gives lectures at Suffolk County public libraries.

"I'm giving you the latest and greatest in food safety," he said. "So if you're new to the sport and not going by family traditions, this is the new way to do it."

Daniel Hampton, 67, of North Babylon attended a recent talk by Mr. Vosburgh at the local public library with his wife, Cooky. He plans to visit East End farm stands to buy produce in season so they can start canning together.

"I'm originally from South Carolina, and when I was a little boy, we never really went to the store," Mr. Hampton said. "We lived on a small farm and we grew okra, corn, potatoes, strawberries. Everything ended up in a jar."