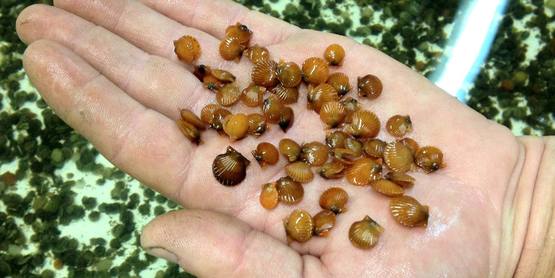 Four goals are seen in the excerpts and quotes from the open house interview by Marcelle S. Fischler in the Long Island section of the New York Times, January 21, 2001 -  read the article here.

To teach culturing, spawning, planting and monitoring shellfish, he (Kim Tetrault)  jumpstarted the Southold Project in Aquaculture Training with an open house. The new training program may help the environment and hasten a shellfish renaissance. Lessons include seeding and tending shellfish gardens by the hatchery in the canals. Research opportunities and monthly workshops.

This is a community effort for the betterment of the town and everybody in the town. That's a critical component and that's why it's going to work. Participants sign on as stewards.

For his shellfish restoration and information gathering effort ... targeting ... folks who remember the days when the bay was so covered in scallops they risked getting their toes snapped walking in the water. To reseed the bay ... The whole point of this project and the whole point of my job ... is to provide the parents for the food that you eat from the bay. His goal, "We want our bays back. Like in the glory days."

From the hatchery, the shellfish are moved to upwellers in the nursery outside until they are large enough to be transferred to the creek or bay. SPAT members' oysters serve as a "spawner sanctuary" which fuel the local waters with larval shellfish.

Though not mentioned in the NYT, this goal later became a necessity, as a result of the budget cuts.

" Marine Dreams: an Oyster in Every Plot" (from the Long Island Journal section of The New York Times on January 21, 2001)

If you would like to make a donation to SPAT: Print Form or Online Form.